Hello. Not very long since we last met, right?

As you and I know, The Book Blog Train season 2 has come to an end. And the wait for the results and thereafter, the season 3 has begun. As a participant, it was a mixed emotion for me though joy and pride predominate. Just like the two sides of the same coin, the blogging challenge had its own ‘Wow’s and ‘Ow’s.

It was my first time participating in a challenge which had specific topics (there were 14 in total if I’m not wrong). To be sure, I loved all of them! Initially I felt like writing on all of them. The max limit was 2 posts. And of course, hyperactive me was determined to make two posts. My god! You hosts gave me such a hard time in choosing.

Right after the topics were announced, I went out of station for my holiday and quite naturally, lost the date count (forgot rather). I was pretty lucky (*laughs inwardly*) that I mistook 26th to be the last day for the linky. I thought of the “by 27th” as “before 27th” rather than “before midnight of 27th”. So, according to myself I had a few hours before the linky closed.

Previously I had been waiting for “words to flow” rather than “making them flow”. So, I shook my head for something to fall out. And the first line did. Then, the words began flowing. (I guess there was some kind of blockage in the pipelines in my brain. Do you think I need to get them checked? 🤔🤔)

That’s why I am so proud of my two posts, especially the poem. It’s my first unrhymed poem and it’s all thanks to TheBookBlogTrain that I ever wrote it. The idea, the prompt, the deadline : a massive salute from me. Without the topic, I don’t think I’d ever had tried poetry of this sort. It was a kind of forced On-Demand kind of poem, the beginning at least. I really really owe the topic setters a biiggg THANK YOU.
The next thing was the engagement. As ya’ll know, I’m a newbie at blogging. Just a little more than two months. The engagement the two posts witnessed was really overwhelming. It makes me so happy to know that people can relate to what I write. Afterall, I’m a common girl who pens down common everyday events in the lives of the common people.

Like many others, I too had the prime motive of raising the stats of my blog when I registered for the challenge. However, in the end, stats don’t really matter that much. I enjoyed hovering my way through the links, reading, commenting and sharing the posts. The hidden teacher within the soul of TheBookBlogTrain also taught me to be more organized. I felt like a pro organizer when I was reading through the posts. The picture below can acquaint you better with what I am saying. 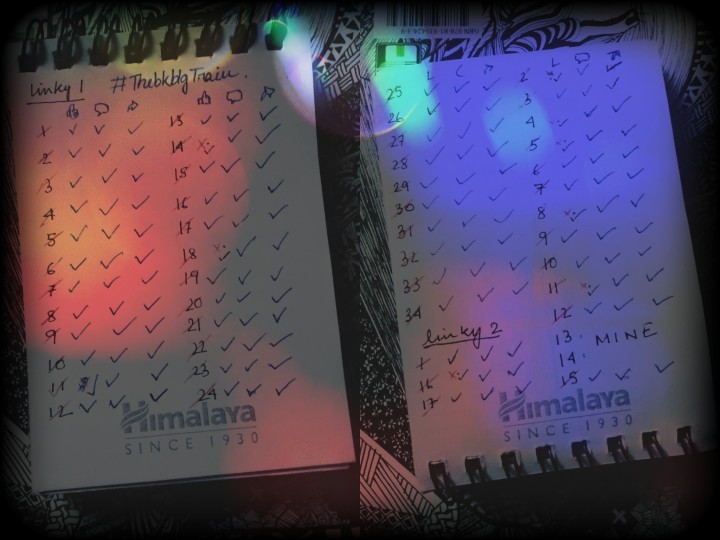 Tadaa ! Have a glance at my organiser

Two major setbacks of the event (for me) are as follows:

Firstly, some of the non-wordpress blogs have me quite a bit of trouble. It was mandatory to interact on all posts. I had a hard time looking for the like/comment buttons on a few blogs. And because I’m not smart enough to find them myself, I troubled dear Vidhya every now and then with “where is this?”, “how do I do that?” Thank you so much for being patient with me dear girl!!
I have got a bunch of new accounts now. In sites I don’t even know and definitely which I never plan on using again. No one’s fault. Just that I’m not very well acquainted with any other blogging site other than wordpress.

The last and the scariest of the setbacks was Plagiarism, something which each and every creator hates as well as dreads. I don’t understand why people try copying other people’s creation without due credit, let alone permission. In the time they spend after searching appropriate copy-worthy stuff, they’d have created worthy original content probably with much less effort.
True, the cases were resolved promptly and strictly by the hosts. But that cannot change the fact that the challenge saw plagiarism, however small may be the number. I don’t want to sound rude or something, it’s just the truth. I’d request the organisers to add disclaimers stating that plagiarism of any kind is strictly prohibited and that the any copied content should be quoted with links to the source, etc, etc… You are better acquainted with the rules than me. Please be clear with these legal issues in the rules next time.

Ups and downs are sure to occur and its inappropriate to stick to the past. We must move on. But, when we do move on, its our duty to take the lessons of the past with us. The season 2 was a magnificient experience. But the next is going to yet better. WE will definitely make it so, won’t we?

And guys, I really loved reading your posts. It felt so good to meet so many fellow bloggers and fellow bookworms. I hope you all liked meeting me too 😊😊.

A special mention to @swishandflick. He’s the first one to comment on my entries. Thank you! I’ve already been aware of his instagram a long time now. Being aware of his blog felt just as good, if not better! I’m going to have a hard time choosing again. My TBR has grown so much from all the recommendations I’ve had after reading so many posts. And btw, Sudarshan don’t break your promise. I’ve not forgotten about the postcards yet! 😝😂

And then again! Vidhya has been the bearer of the great news that we’ll all be receiving certificates. YAYY! That’s gonna be my first blogging certificate.
And since you’ve already had news, I don’t mind bringing in a bit more! I have another piece of poetry for you guys. It’ll be uploaded soon. So, stay tuned for that!

Overall, it was (and probably still is) a wonderful journey from station to station on a train stuffed with creative bookish bloggers. In the rare instances where the way was lost, we acquired precious lessons while discovering new paths which I’ll keep in mind forever. Thank you everyone. I mean Everyone. Each one of you contributed to making my day better and better and better. As a thank you gift I’ll upload a new poem (don’t mind the topic) as soon as I can.

Finally, take good care of yourselves. Give yourself a pat on my behalf for your excellent participation. Three cheers for TheBookBlogTrain!!

See you around soon!!

This article is written as a part of #Thebookblogtrain conducted by Vidhya Thakkar and Siddhi Palande powered by Penguin India and Redwolf should not be repurposed, republished or used otherwise. The content herein is owned by the blogger. Hosts are not responsible for any infringement caused.”

This site uses Akismet to reduce spam. Learn how your comment data is processed.